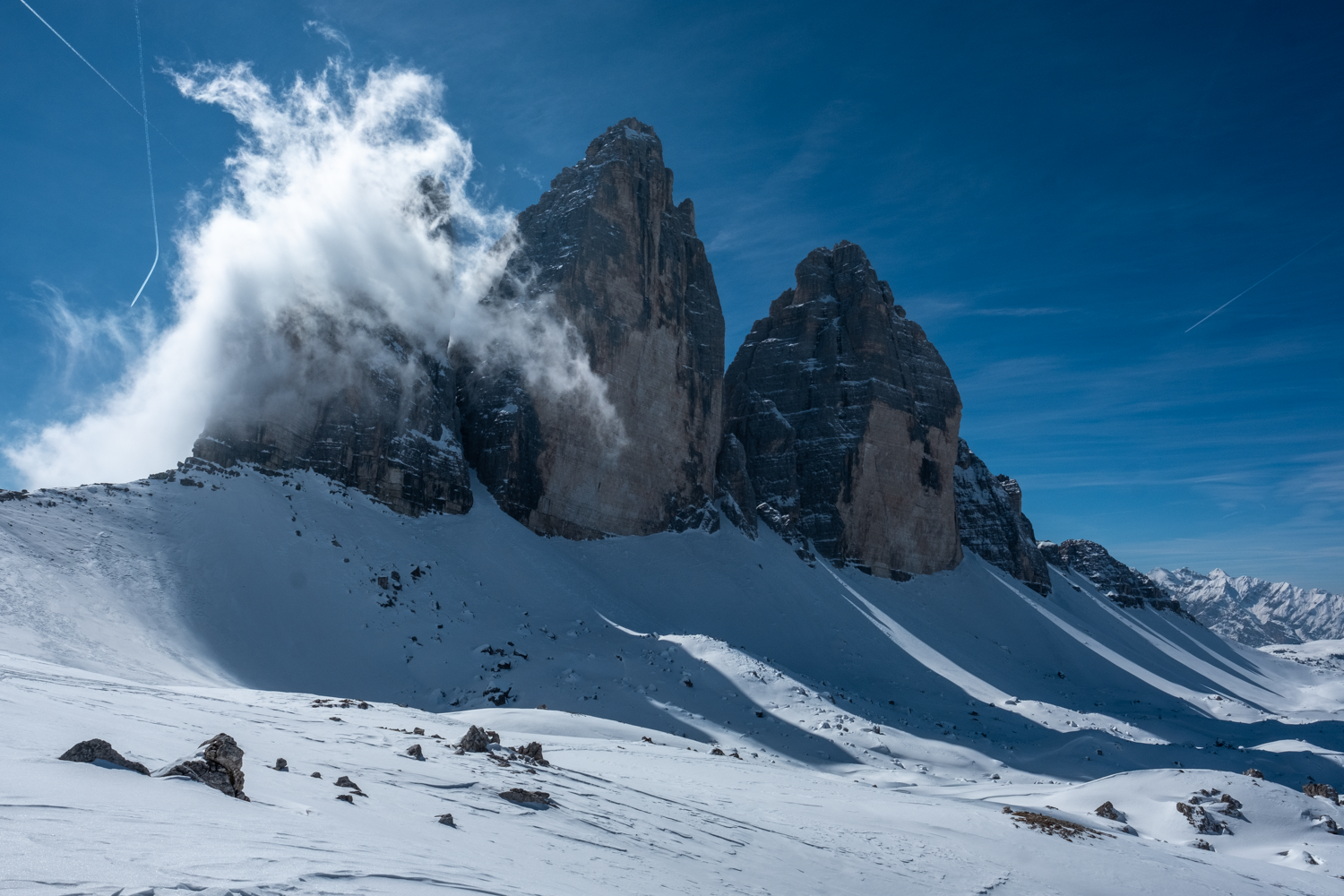 Three Peaks of Lavaredo in winter and summer: trails, hikes and huts

The Three Peaks of Lavaredo – Drei Zinnen in German, Tré Thìme in Cadorino dialect – are one of the symbols of the Dolomites and contribute to make this area worthy of the UNESCO heritage title. They are located in Italiy, on the border between Veneto and South Tyrol, near the towns of Cortina d’Ampezzo, Misurina, Dobbiaco, Santo Stefano di Cadore and Bagni di San Giuseppe.

The Three Peaks of Lavaredo are part of the history of mountaineering, as many great climbers of the past, including Riccardo Cassin, have tried their hand with them.

What’s the geography of the Three Peaks area

The Three Peaks are called:

The base of the peaks, on the other hand, is about 2300 metres, and it is around this altitude that the three reference refuges / mountain huts (rifugio in Italian) are located:

It is an easy to reach destination, offering a natural spectacle and entertainment options for all tastes and in all seasons.

In summer, moreover, it is possible to reach the Auronzo refuge directly by car.

How to reach the Three Peaks of Lavaredo

There are two options to reach the Three Peaks of Lavaredo, from the south or north.

The most common option is to reach the Three Peaks from the south, as in summer the (toll) road can be travelled as far as the Auronzo hut, which is the destination on which you can point your navigator.

The most beautiful view, however, is the one that can be admired from the north side, so it is always advisable to take the path that leads at least up to Forcella Lavaredo.

It is also possible to arrive from the north, but in this case it is necessary to leave from Sesto and walk through the Fiscalina Valley (Val Fiscalina).

Indications on parking and toll

In summer, it is possible to reach the Auronzo Refuge by car. Be prepared, as the road leading to the refuge requires the payment of a toll, which for cars is 25€. You can always leave your car at the toll booth and continue on foot, thus avoiding the payment. Read below for the hikes starting from this point.

In winter, instead, you follow the road to the Auronzo refuge, stopping in the car park near the toll booth (in this case, of course, without paying anything).

From here it is possible to climb up to the Auronzo refuge on foot, via a very easy route even in the presence of snow, or to go up via the snowmobile service for a fee. The ascent on foot takes 1:30-2 hours, is very easy and does not require crampons or snowshoes.

What to do at the Three Peaks of Lavaredo

Here are some ideas on what to do once you get to the Three Peaks.

In summer, spring, autumn, or in the absence of snow:

In winter, or in the presence of snow:

In winter, the tour of the Three Peaks should be carefully assessed according to the risk of avalanches and the conditions of the trail. In winter, the most popular option is the path that goes from the Auronzo Hut to the Lavaredo fork (forcella Lavaredo), and from there – always evaluating the conditions – to the Locatelli hut.

“Free” hike, starting from the tollbooth

This excursion starts at the toll booth and is perfect if you don’t want to pay.

Arriving only up to the Auronzo hut

This hike is significantly more demanding than the others in this section, but it can also be considered as a two-day hike, with an overnight stay at the Locatelli hut.

Tour of the Three Peaks of Lavaredo starting from the Auronzo hut, with toll payment

The toll payment allows you to make a shorter hike, by using the car to travel the stretch of road that you would have covered on foot in the previous case.

Tour of the Three Peaks with ferrata

A variant of the tour of the Three Peaks is the one that involves passing through Mount Paterno along the Via Ferrata De Luca-Innerkofel and returning along the Sentiero delle Forcelle. Here is the track with departure and arrival at the Auronzo hut.

Hiking in winter with snowshoes and crampons

Here are some snowshoeing options in the Three Peaks of Lavaredo area.

To the Auronzo hut

To walk this trail, if the road is beaten, you generally do not need snowshoes or crampons. In any case, you can always ask the Auronzo refuge for information about the condition of the trail.

From the Auronzo hut it is then possible to continue towards the Forcella Lavaredo. In this case, atual crampons are preferable, but the use of chain crampons can also be considered. In any case, you can ask the hut for information before venturing, or evaluate the conditions when there. The trail, depending on the amount of snow, can be very exposed in some sections.

From the Forcella Lavaredo it is also possible to continue to the Locatelli hut, also in this case carefully evaluating the snow conditions and the danger of avalanches.

Snowshoeing on the north side: Val Fiscalina and Locatelli hut

Park your car at the Hotel Dolomitenhof and hike through the Fiscalina Valley to the Locatelli Hut.

Bonus: a time lapse of the Three Peaks of Lavaredo in winter